PM of Cote d'Ivoire for boosting trade with India 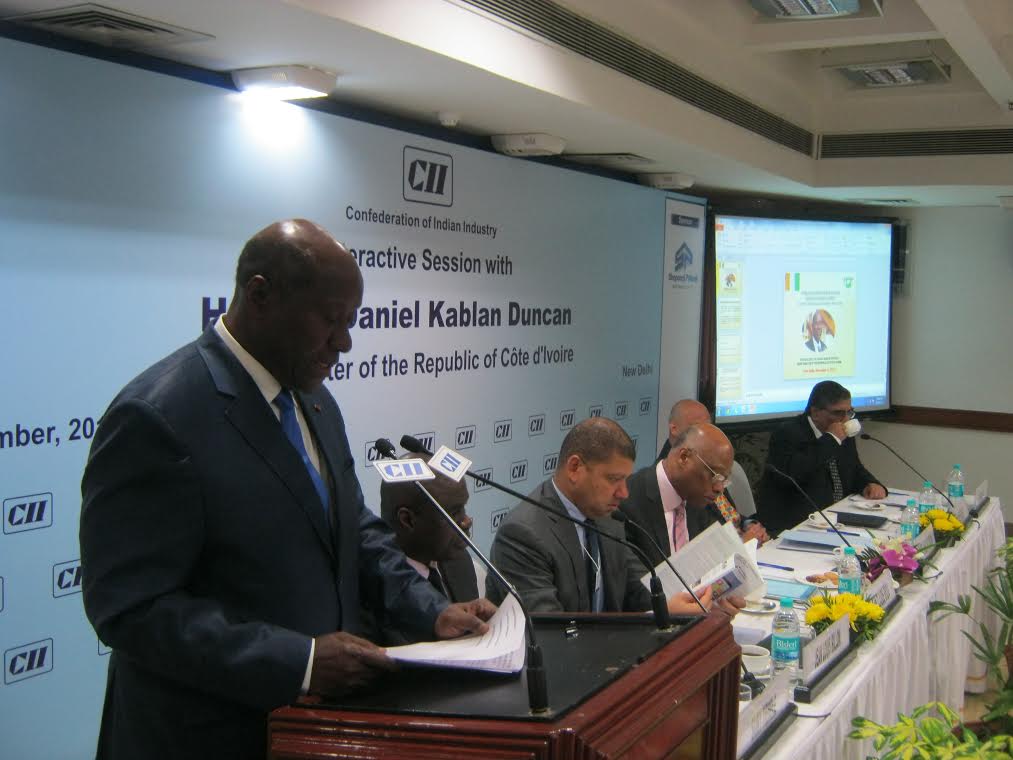 © PM of Cote d'Ivoire for boosting trade with India

There is a need for India and Republic of CÃ´te d'Ivoire or Ivory Coast to boost their trade relationship and diversify their trade baskets and move up the value chain. This was stated by HE Daniel Kablan Duncan, Prime Minister of the Republic of Ivory Coast at a meeting organized by the Confederation of Indian Industry in New Delhi Tuesday.

According to the Prime Minister, Ivory Coast exported largely primary articles such as farm produce and its imports consisted of finished items such as pharmaceuticals, automobiles and plastics among others. He was also of the view that the trade was also below potential and had substantial room for improvement. He invited Indian companies to invest in Ivory Coast and value-add to the primary articles that they are currently importing.

He pointed out that Ivory Coast was one of the fastest growing countries in Africa and the world with growth rates in the region of 9% over the past couple of years. He stated that the growth was further expected to pick up to 10% in 2015. He highlighted that peace and stability had been restored in Ivory Coast and reforms were being undertaken to make the country more business friendly. These included setting up of a one stop shop for investment, streamlining of approvals and easier access to land among others. He stated that it would take 24 hours to set up a company in his country and 21 days for that company to obtain the requisite approvals for an investment project and begin operations.

Highlighting the areas of opportunity, he stated that these included food processing, infrastructure development, education, skill development and human resource development. He stated that 18 companies had already invested in India and hoped that many more would follow.

In his address, Ambassador Dinesh Bhatia, Ambassador of India to Ivory Coast stated that CÃ´te d'Ivoire was a land of opportunities with plenty of natural resources like manganese, gold and chromium as well as very fertile agricultural land. He stated that a sign of the return of peace and stability to Ivory Coast was that the African Development Bank had reinstated Abidjan as its headquarters. He pointed out that promoting bilateral economic relations between India and CÃ´te d'Ivoire was a priority of the Government of India and a Lines of Credit worth US$ 160 million had already been extended to Ivory Coast and over 85 students had been trained under the ITEC programme.

Earlier, in his welcome remarks, S Paramasivan, Senior Member, CII and Deputy Mangaing Director, Afcons Infrastructure Limited stated that CII had been taking an active role to promote bilateral relations between the two countries. In his view, some of the areas where the two countries could cooperate included infrastructure development, mining, cocoa and other agri and food processing industries. He mentioned that Indian companies could look at port development inIvory Coast as the country had a very long coastline as well as the development of the Abidjan Metro.